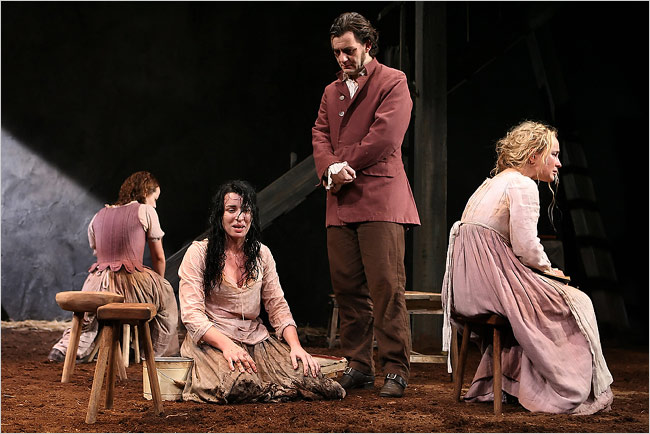 Brian Friel’s play Translations, set in 19th-century Ireland, is about using languages to communicate and control. As you might expect, the relation between Irish and English figures prominently in the play’s plot. It is only fitting that Oleg and I are writing this post in Dublin, at the European Summer School in Logic, Language and Information, because what we want to show you is a nice perspective we learned here last week that relates multiple ways to interpret natural and programming languages. In honor of multilingualism, you can download this post as both a literate Haskell program and an OCaml program. To make sense of this post, you only need to know either Haskell or OCaml.

Linguistics often labels this picture as

whereas computer science usually labels this picture as

In natural language, two fundamental types are e, for entities, and t, for propositions. Our abstract syntax includes two entities john and mary, two quantifiers everyone and someone, and a transitive verb saw. In Haskell, we define a type class that relates two types e and t. We call this type class Symantics because its interface defines syntax and its instances define semantics.

In OCaml (or more generally ML), we define a module signature Symantics that includes two types e and t. For example, the function saw maps an object entity and a subject entity (in that order) to a proposition.

Without specifying either form or meaning, we can already construct expressions in the abstract. In Haskell, an abstract expression has an overloaded type. The following definitions each have the type Symantics e t => t because they denote propositions, not entities. For example, test1 is the proposition that John saw Mary.

Analogously in OCaml, an abstract expression is a functor that takes a Symantics module, say S, as input, and produces (a module containing) values whose types are defined in S. The following functor produces values of type S.t because they denote propositions, not entities.

With these test cases in place, it is now time to implement Symantics concretely. The two arrows in the pictures above amount to two implementations. For simplicity, we take the meaning of a proposition to be whether it is true in a model with just two people, John and Mary, who saw each other but not themselves. In Haskell, we provide an instance of the Symantics class.

We can then resolve the overloading in test1, test2, and test3 above to compute their meaning. Indeed, test2 is false because no single person saw everyone—John didn’t see John, and Mary didn’t see Mary—but test3 is true because each person was seen by a (different) person.

Meanwhile in OCaml, we provide a module for the Symantics signature.

We can then instantiate the TEST functor above by this Truth module.

or another OCaml module

and test it in Haskell

to reveal the well-known scope ambiguity in the English sentence “someone saw everyone”. To wit, test2 and test3 have the same form but we have already seen that they have different meanings.

Exercise: extend the language to include sentences such as “someone’s mother saw everyone’s father” and “Mary knows who John saw”.

There is a ton of work in both computer science and linguistics along these lines: to extend the language of abstract expressions, to refine the form and meaning arrows, to simplify the metalanguage in which the interpreters are implemented, to build more interpreters that perform additional processing such as logical deduction or partial evaluation, to compose interpreters, to optimize self-interpretation…

In our recent paper on tagless interpretation, Jacques Carette, Oleg Kiselyov and I tried to survey the most immediately related work, yet we completely missed the connection to natural languages and did not realize that pretty printing is another interpreter. It was at a ESSLLI workshop on type-theoretic grammars, thanks to several talks about abstract categorial grammars (ACGs), that we recognized this connection. Our paper describes tagless partial evaluators and CPS transformations for a programming language. These interpreters do not map function types to function types homomorphically (whereas ACG arrows do). A lobotomized version of this paper is accepted at APLAS 2007; the source code is online.

Finally, multiple interpretations are about to arise in the two ongoing series of posts on this blog.